Can’tcha just hear it? Honestly I did when I pulled the Guitar Center flyer out of the mailbox. There it was, this shimmering little boppity-bop kit just staring me in the face. Loved the color in about a second, and I could see using it for jazz gigs if it sounded as good as it looked. 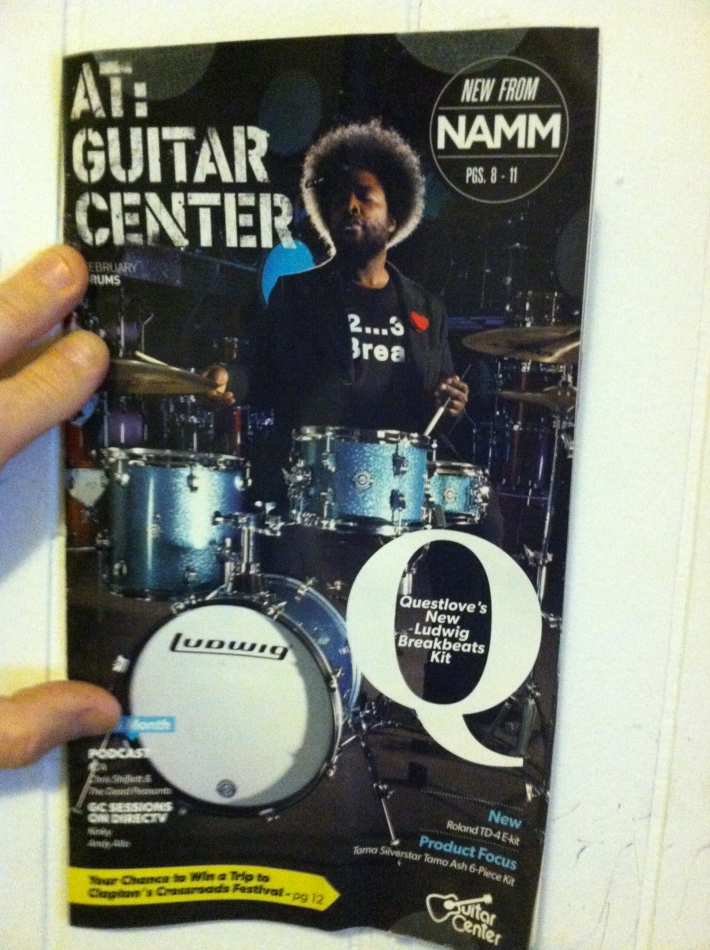 So the next obvious question was: What’s in those shells?

And therein began the great quest for Questlove’s Breakbeat kit low-down, yes it did…

The adventure began early Thursday night, when I got home from an idiot day of commute through Los Angeles, January 31. After being mezmerized by the azure shimmer, I scoured the Internet with no luck. Looked on forum pages, no luck. Checked on Facebook and the Ludwig-Musser page, no luck.

Next morning, same drill. Looky looky here, looky looky there, nada. I went to the Guitar Center channel YouTube site and heard part of the kit, but still, no shell info.

I then called Guitar Center in Hollywood. No luck. They had it in the warehouse, but no info on the shells…

Allrighty… well then, why not just call Monroe, North Carolina and ask someone at the factory?

Easier said… seems that number is not exactly hung out on a shingle, which is understandable. They’d be answering questions all day and night and have little time to make drums…

Time for Plan B: call Conn-Selmer, the parent company, in Elkhart, Indiana, and ask them.

“Hi, I saw the new Questlove Breakbeats kit and was wondering if you could tell me what the shells were made of?”

The very helpful guy on the other end of the phone said he didn’t know but that he would walk down to some office and find out. So, he did, with his headset in tow, and basically told me this:

“The literature we have… hmmm… says… made of select wood, 7-ply, imported, by the people who do the Elements series…”

So, he told me all he knew, and I really appreciated the fact that he took the time to do some legwork. Seriously, can you imagine your cell phone service being even remotely this helpful?

Okay, select wood it is… whatever that might be. I posted what I had just found on the Ludwig-Musser FB page with hopes of hearing more soon… and about 3 hours later, BAM!

So, this little kit that I am looking forward to has a 5×14 snare, 10″ rack tom, 13″floor tim and a 16″ kick. Other than the small kick, my maple Centennials have very similar sizes. KInda cool. The 16″ kick comes with a riser, which sounds very interesting.

I have wanted Ludwig to come out with a cool little jazz kit for a long time, and if this it it and does the trick, I’m in.

Now in a seriously strange turn of coincidence, it just so happens that my beloved girlfriend was in the process of knitting me a scarf that is guess what color? Well, not exactly, but pretty damn close…

And there you have it: the great quest for Questlove’s Breakbeat kit low-down has been solved, which means we can all:

I stopped by Guitar Center in Hollywood to see if they had a kit set-up. They did, fresh out of the box.

But first let me say that a couple of other guys were checking it out, which let me hear it at a distance. First impression: the kick is awesome. Cool tone, nice thump on top of that. The beater hits about 2-3 inches or so from the rim, which means higher frequencies… hence, the cool tone.

The toms came with pin stripes, and didn’t sound bad at a distance (10 feet at the most). Nice smack. With thinner heads tuned tightly, I suspect my jazz needs would be met just fine.

The snare was not tuned too tightly, but it too had a nice smack. Its sound on the Guitar Center Channel of course is miked, tuned and played by the master himself (Questlove). Still, I had no complaints, and snares off didn’t sound bad either.

But it’s the kick that really got me. Great feel with the riser using a Ludwig pedal, and I got great control and rebound even playing heel down. This mattered most, because in a small club, you need ALOT of control for volume…

Samba, be-bop, funk… again, I had no complaints. The hardware was solid and no muss or fuss, and yes, the drums ARE tiny… but they delivered for what I wanted.

When I asked the guy at Guitar Center what kind of wood they were using, he said it was being promoted as cherry wood. I’d seen “poplar” on the Ludwig Facebook post from the previous day, so I asked him if he was sure…

Five minutes later, he came back and said he’d just called Ludwig and that it was actually basswood. So, there you go.

Now mind you, with the insanity of the NAMM show just passing and a new kit being released, I would expect information to possibly get jumbled and I don’t care. This kit funks, bops, and sambas for me just fine, so it can be comeoniwannabangya wood for all I care.

Ludwig, Questlove, you got my vote. 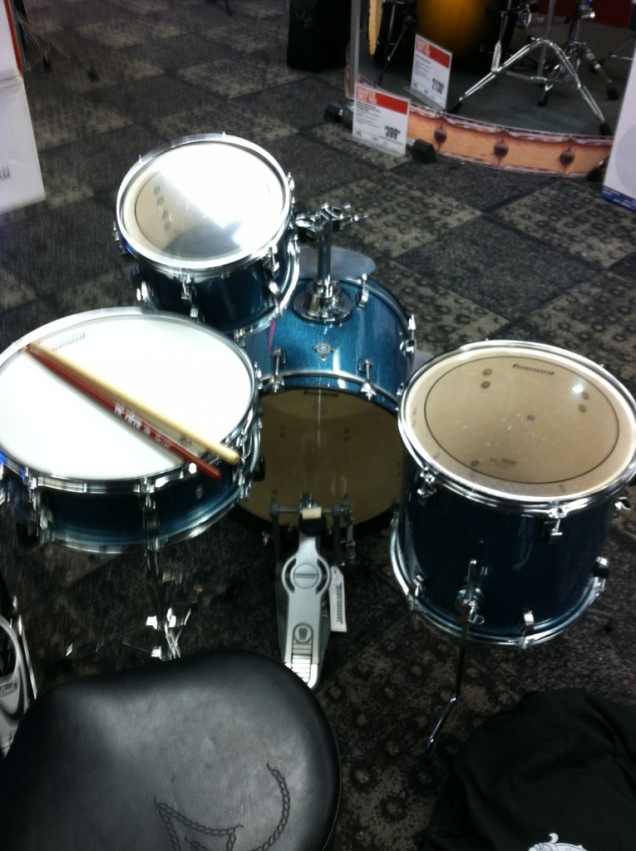 31 thoughts on “Ludwig Breakbeats by Questlove: What’s in Those Shells??”