When I was a kid growing up in Delaware in the 70’s, I listened to a lot of top-40 radio while in elementary and middle school. Three Dog Night was one of my favorite groups, and it was the first group where I distinctly remember listening to the drummer for the feel he created. That drummer was Floyd Sneed.

He played a clear, acrylic Zickos kit with double bass, which at the time was about as cool as it got. Floyd was built like Billy Cobham, so his physical presence behind the kit was formidable. His solid grooves and use of backbeat were what really got my attention. (Note: If you’re ever in Hollywood and want to see his kit, walk through the doors of Pro Drum and look up and behind you, on the shelf above the door…).

Disco was about eight years away from invading the airwaves, but Floyd employed a kind of groove that clearly preceded what would become the classic sound, and he also played it in a way that Billy Cobham would later popularize on his China cymbal. “Black and White” kicks that groove in well, and I remember getting a very strong sense of feel that made me appreciate keeping time quite a bit.

His backbeat always seemed (at least to me) to hang back just a bit, creating a very cool platform for the other musicians to contribute over. Some guys just have it in their blood, and the rest of us have to work at figuring it out. I still cogitate on it from one measure to another at times…

Three Dog Night owned the airways for a brief period during the 70’s, delivering one pop hit after another with no Pro Tools, and I would seriously doubt any click-tracks. It was human beings playing human feel, with incredible harmonies. As disco began its insidious invasion, I lamented the loss of simple pop music, but I often thought about Floyd Sneed and his great feel. “Out in the Country,” “An Old Fashioned Love Song,” “Never Been to Spain,” “Joy to the World,” and “Mama Told Me Not to Come” are just a few that come to mind.

Many years later, I had the opportunity to meet Floyd when I was writing for Easyriders magazine. He lived near the offices, and he was playing in a little bar around the street. I introduced myself during the break and told him how much I had loved his playing over the years, and we had a great conversation. Turns out he was as equally interested in art, and he has done a lot with it as a mode of personal expression. 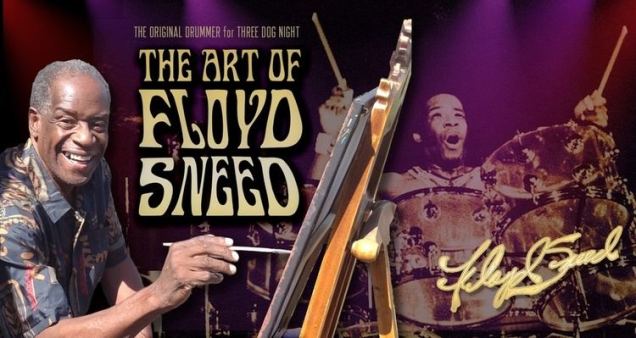 We met a few more times at the same bar, and one night, he gave me a small paperback about Three Dog Night. I have no idea what ever happened to it over the years, but it meant a lot coming from a drumming idol.

Every generation has their music and the values they associate with it. Mine will always be the 70’s, an era that emphasized the human element of real-time performance. Floyd’s grooves, feel, and musical fills hold a special place, and if you want to hear good, solid, musical drumming, check out the streaming tunes available for a bit of old school schooling. You might just find yourself tapping your toes, bobbing your head and humming… the way you do when something works the way it should and is played as it should.

For me, Floyd Sneed’s playing is a backbeat model for drummers, someone I will always look forward to returning to, providing reminders of when music was truly magical to me, and how to keep my own feet tapping and head bobbing…

For more information on Floyd Sneed, checkout his website at http://www.floydsneed.net